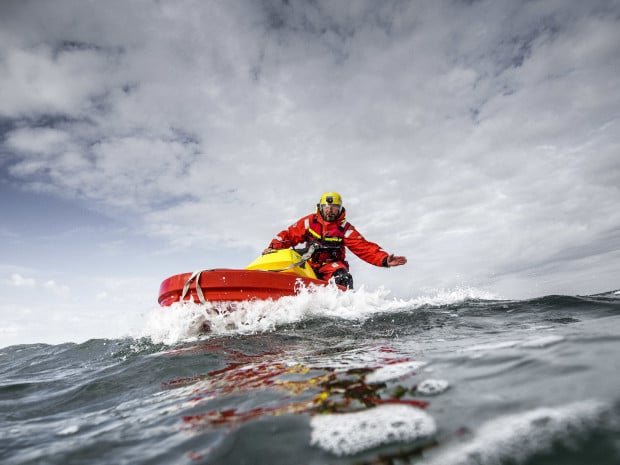 The Swedish Sea Rescue Society (SSRS) – a non-profit organization founded in 1907 and currently responsible for 70% of all of Sweden’s ocean rescues –  recently asked Easy Laser to help investigate why the reversal gearbox would fail on one of their rescue ships, the “Marianne Bratt”.

The ship has a waterjet propulsion system and has had several critical failures since it was launched. Their initial analysis was that the failures were linked to the machinery installation and that high precision laser alignment measurement could give us the much-needed information on how to correct the issue. The power transmission is a cardan, approximately 800 mm in length. The reversal gearbox was permanently fixed to the engine, which in turn was mounted on vibration dampers.

How good alignment is required?

The measurement showed a rather large angular error in the installation. The questions are of course how to interpret and decide what would be a reasonable error in this type of installation. In general, the foundation (surface) where you mount the cardan has to be within 0.05/100mm while the machine is onshore. Strictly speaking, it is unreasonable to require such high tolerance considering that the driver (engine) rests on vibration dampers and that it is mounted on a “soft” surface such as a ship’s hull. But you should be able to align it down to 0.2/100mm.

Demands are greater in the sea than on land

The art lies in finding the “middle way”. You have to measure the engine, align, turn it and rock it back and forth, then measure, align, take it out for a “spin” and then measure and align again. Each iteration you will improve the alignment bit by bit. We helped them with the measurement, results and a method. Since it’s a machinery installation on a ship you have to factor in so much more than the parameters you would be used to on land. To successfully correct the alignment on this ship you have to measure both on land and in the sea.

Easy Laser recommendations included a referral to a well-renowned service company with experience in the marine industry, and with their own shaft alignment system. New dampers need to be installed and the drive train has to be realigned. This is a critical installation, these rescue ships are often involved in high-risk missions where lives are at stake, and failure is not an option.